Today’s workplace finds music to be part of it given its momentary continuity that enables music to decorate time. Most of our time in the day is spent working and most of the work includes a lot of screen time, which is why music is now included in our daily tasks. This is considered a manner of optimization for the boredom that comes with looking at screens continuously. 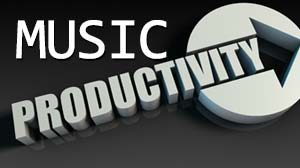 The efficiency of music depends on how engaging the task is and how creatively demanding the work is. According to research, music is especially helpful for tasks that are repetitive and clearly defined. Other subjects showed a boost in happiness and efficiency when listening to background music. Some research would suggest that the mood changes accompanied with playing favourable music contribute to the increased productivity.

Music provides an escape in a noisy environment

A noisy work area can stop personal productivity and even though an open workspace can enhance cooperation, the noise can be overwhelming to those deep in work. A pair of headsets can make up for the lack of a physical escape or a private area. Studies have shown that subjects listening to music finished their work and were more efficient compared to those who did not as the music enhanced their mood.

Ambient noise is good for creativity

An atmospheric presence is the best option if you do not prefer listening to music while you are in a creative headspace. Studies indicate that moderate noise levels can boost creativity while loud noises make it harder to concentrate especially if you are engaged in deep work.

Natural, ambient sounds like waves crashing can enhance concentration. Aim for soft background noises, whether they occur naturally or are generated deliberately.

Lyrics tend to be overly distracting

Lyrical music has immense benefits for low immersion tasks especially physical tasks but the opposite is true for demanding work. Lyrics can prove highly distracting if you need to focus. Intelligible chatter contributes to distraction as you will have to shift focus to determine what is being said. When performing language-related tasks like writing, lyrics are not advised. However, for creative tasks that are unrelated to verbal architecture, lyrical music may not be as influential.

Listening to familiar music when you need to concentrate on a project could be advantageous. New music brings with it an unexpectedness that leads you to focus on what follows but you know what to expect with familiar music so it takes less concentration to pay attention to it. When using music as you work, it is best to go the familiar route.